USDCHF at Parity but for How Long?

Since August 2022 at 0.937, USDCHF has been in a bullish sequence as this was supported by the recent dollar strength. This may stall as dollar seems like it is due for a breather, but this is only temporarily. In my opinion, this stall would be a short-term correction prior to a continuation to the upside.

Taking into SNB’s recent commentary it seems like they are targeting a real stability to fight inflation. Switzerland’s inflation is around 4% below its trading partners which would mean the nominal exchange would need to be at least 4% stronger to support a stable exchange rate. This would support CHF’s strength in the near-term future for at least a few weeks.

Currently, USDCHF is at parity, but this may reverse as it seems like the pair is due for a medium-term correction but the bigger picture is telling us that a continuation to support dollar strength is still in play for at least up to Q2 2023.

Lets do a top down on USDCHF

Although since 2011 low USDCHF has been playing out a bullish sequence, but majority of this price action has been coiling into a triangle which in fact has been officially triggered yesterday as price breached through 1.00646.

Before we expect USDCHF to reach into the moon, we must be aware that a correction or another push down prior to a continuation is still on the cards. 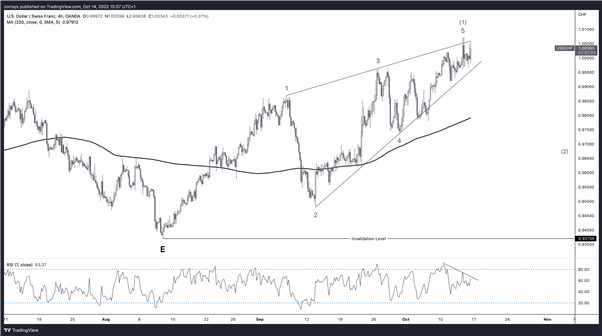 This chart is interesting. I can see a 5-wave impulse as a Leading Diagonal, but I can see it is exhausting and giving clues that a correction to the downside is due.

Firstly, the price action is very choppy and overlapping. Secondly, there is strong RSI divergence which shows the bulls are running out of steam.

I have also placed the 200 Day Moving Average which is below the current price but once this correction plays out, the moving average can be used as a dynamic support area where we can expect price to stall around prior to a continuation.

Overall, the near-term picture is telling me that CHF is keen on gaining strength and the Dollar is due for a stall. On the other hand the bigger picture is still supports a continuation once that correction is done, as long as price remains above 0.937.

We use cookies to target and personalize content and ads, to provide social media features and to analyse our traffic. We also share information about your use of...

What Is the Outlook for China’s External Surplus?