Get Your Free AUD Forecast

The Australian Dollar is one of the ‘major’ currencies in the global markets, but its turnover is materially smaller than that of its US, Eurozone and Japanese peers. That disparity in scale can lead to serious shifts in power dynamics, whereby say the US Dollar exerts far greater influence over the course of AUDUSD than does the Aussie Dollar. What’s more, the currency’s top fundamental considerations within its narrow cadre has historically been a combination of carry trade appeal (high interest rate), commodity exporter and a western proxy for Chinese economic strength. Heading into the new year, the RBA has the benchmark materially lower than the BOE, RBNZ and Fed; while China’s economic outlook has been further hit by its Covid policy reversal. That could exacerbate the influence of cross winds and make for interesting technical developments.

The first cross worth highlighting is the most liquid of the Aussie Dollar pairs: AUDUSD. There is much more chop for this cross than some others, but the last few months of the recovery owe much more to the ebb in the Greenback than material improvement of the Aussie currency. In fact, in an equally-weighted Aussie Dollar index, the measure has itself ebbed modestly amid much greater chop. With the Dollar’s back and forth of last, we have seen the development of a provocative ‘right shoulder’ on a nearly two-month old head-and-shoulders pattern. Even more unique is that this potential reversal pattern is following an inverse head-and-shoulders pattern that formed between late September to the break on November the 10th. Just as with the clearance of 0.6500 back then on the motivation of the US CPI, it is more likely that US event risk resolves this pair’s next leg. A break through 0.6675 or above 0.6900 would be a significant technical development, but look for the fundamental motivation to carry it through.

As far as liquidity goes, the Japanese Yen is third down on the Bank for International Settlements’ list of most heavily traded currencies. That said, the picture is very different from AUDUSD to AUDJPY. Where medium-term trajectory for the former is tentatively bullish, the course for the latter is progressing generally lower. The Yen crosses are top carry fodder, and the rise in interest rates last year offered a loft of lift for those pairs where the central banks were attempting to keep pace. The RBA (Reserve Bank of Australia) backed off of the tightening regime, however, some months before its most aggressive counterparts which saw an earlier peak and deeper retreat versus some others. Technically, we have a head-and-shoulders pattern to consider here as well. The pattern from June to December was an exaggerated consolidation pattern and the 91 ‘neckline’ break looked to be a significant-enough development. That said, the collection of support down around 87-88 stalled progress and created significant barriers for substantial range reversals. A break can resolve in either direction, but the fundamental potential would be deeper should we drop through 87. 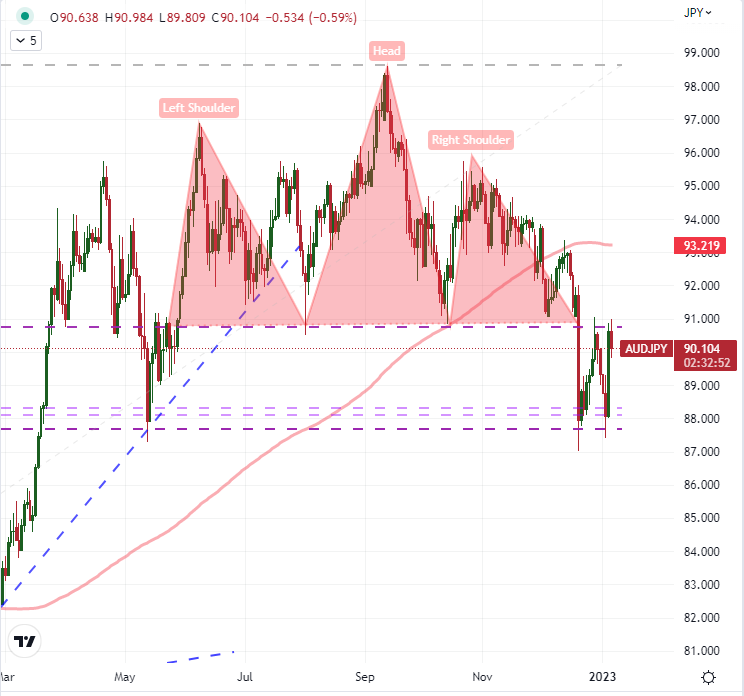 Among the three Aussie crosses I’m highlighting here, AUDNZD is the most exotic for most traders. That said, it is also the most indicative of Australian fundamentals. Without the bullying influence of the Dollar or risk implications on the Yen cross, we whittle down what is most distinct between the Australian and New Zealand currencies. They are both carry currencies, represent commodities and reflect Asia’s overall economic health. So, the perspective here is more nuanced comparison on the matters that contrast. Relative interest rates have strongly supported the ‘Kiwi’ as the RBNZ has kept up its tempo of hikes, but just recently (past few weeks) the 2-year government bond yield spread has tipped back in AUD’s favor. Technically, there have been remarkably consistent trends behind this pair with the October to December leg particularly aggressive in its 1050 pip slide. Since the turn last month, AUDNZD has rebound to test the 38.2 percent Fibonacci of the aforementioned leg. That leaves plenty of room for run so long as fundamentals don’t tip the scales for speculative momentum. 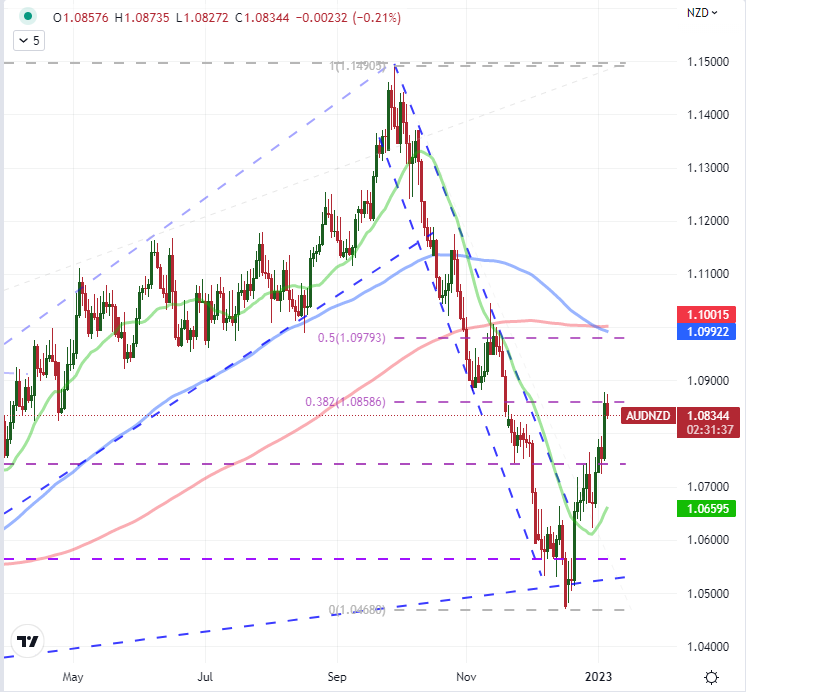 Dow drops more than 300 points with U.S. stocks on track for worst year since 2008